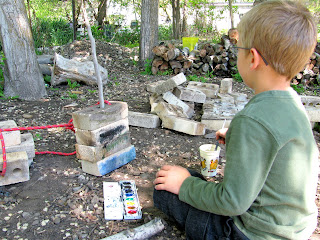 My children are obsessed with hotels. They come by it naturally though, I love to stay in a good hotel.

We often play hotel, they will ask me where their room is and I will point them in the right direction. Last night I wished that I had a hidden camera though to catch Seth and Amelia playing. We were eating dinner and they were playing that they were eating in the hotel.

He told us all about their long trip to Logan from Nebraska and that they were staying at our hotel because there were no hotels in Nebraska. He also informed us that he was on vacation with his sister while his wife, children and parents were at home. His manners were stellar and he actually ate all of his salad.

This weary traveler can come stay at my hotel any time.

I have also learned recently that it's not enough just to stay in a hotel, he likes to build them also. 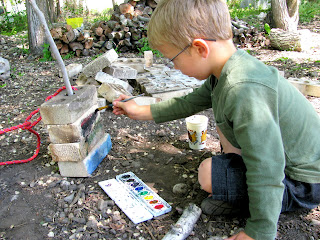 Email ThisBlogThis!Share to TwitterShare to FacebookShare to Pinterest
Labels: imagination, my life, the boy

I love the fact that he's painting the bricks! LOL!