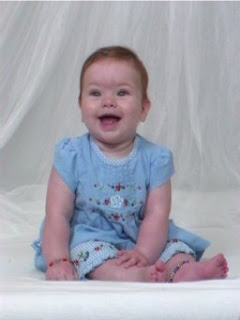 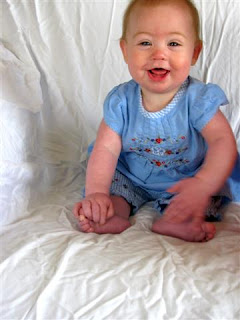 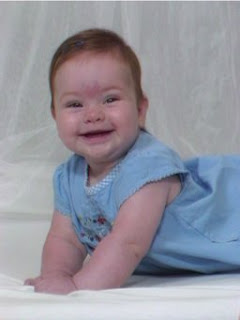 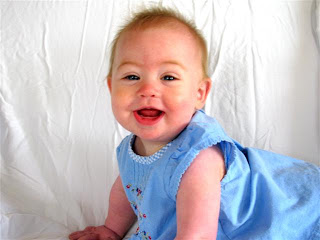 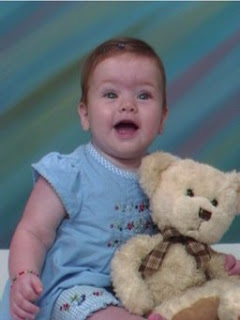 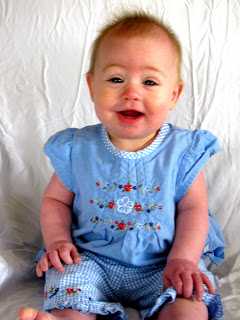 Liberty is so small that she can wear most of Emma's clothes. This is bittersweet. Sometimes it makes my heart ache so much that I think it will burst. Other times, I just smile as I remember the times that my other sweet baby girl wore it. I took these pictures of Libby on Thursday. I can not believe how much she looks like her big sissy.

I think that Seth can sense when I am really missing Emma. I didn't say anything about it the other day, was just thinking it and he came up, gave me a hug, and said, "Mama, I really miss Emma". Somedays it is just so hard. Others, I can breathe a lot easier. Just goes to show it never ends. People who told me that I just needed to get over it, or give it time it won't hurt anymore, they just don't understand the magnitude of the grief of losing a child. It doesn't matter what happens in your life...there is always something missing.

We are having family pictures taken next month. Typically this is something that is hard for me as my whole family is never there. We have 2 different family pictures; ones with Emma and ones without. Kind of hard. Ok, really hard.

However, we are having our pictures done by Shelly Geller. What makes her so special is that she understands the loss we feel. Her sweet boy, James, died 3 years ago this month. He was 22 months old. He is the same age as Seth. I hold Seth a lot tighter when I think about Shelly wishing she could be holding James. He was also their oldest. She tries to incorporate the child that has died into the pictures in some way. Check out this photo session she did for an expectant Mom who had just lost her daughter 9 months previous. If you look carefully, you will see Lucy's name in the photos. Just lovely.

I know it could be worse. I heard a story of a woman in World War II Prussia whose husband died. She had to travel with her 7, 5, 3 year olds and new born baby to Germany for safety, as she was German. They left in late summer and by the time she reached Germany, she had buried all 4 of her children. To dig 3 of the graves, she had to use a tablespoon. For the last grave, that of her infant, she had no spoon so she dug through the frozen ground with her hands. When she arrived in Germany she was severely emaciated and close to starvation.

When burying her baby girl, she had thoughts of killing herself. She had nothing left. She felt the Lord telling her to pray. And she did. She prayed with all of her might. Her faith led her through this most difficult challenge.

My faith does the same. It keeps me here. It gives me hope. It helps me when I think my heart will literally break in two. My faith. So, while sometimes it just hurts so much, I pause to reflect on all that I do have, all the blessings I have, and I know I can make it through one more day. One day closer to being with all of my children and my husband. One day closer to Heaven. 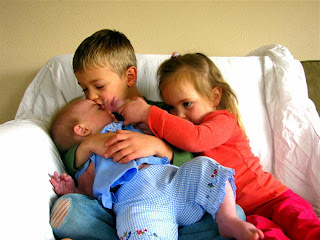 Email ThisBlogThis!Share to TwitterShare to FacebookShare to Pinterest
Labels: grief, my life

Oh, love. I can't even imagine how much your heart hurts, but I admire your strength in so many ways. I have a dear friend at work who lost his daughter when she was 7, and I know how he feels much the same as you do...that every day is a step closer to being with her again, when she's whole and beautiful and all his again.

Hang in there hun! I am thinking of you.

The resemblance is striking!! I can't imagine the grief you must feel over your sweet little girl. Hugs to you, Mama!

*hugs* It is an amazing similarity. I cannot imagine how hard that is. My prayers are with you.

Get over it?!?! Just reading stories of moms who have lost children or who have children going through health problems touches me so much I can't stop thinking about them. If I can't get over someone else losing their child how do you get over losing your own?!?!

Those pictures are beautiful! I can't wait to see how yours turn out. Lots of hugs to you guys.

Kim, I love it when you share pictures of Emma and your thoughts of her. I cant wait to see your family pictures.

So much love to you. I can't wait to do your family pictures. I hope you will feel and see Emma reflected in our session together. I'm amazed how much James is still very much a part of my everyday life even 3 years later. There hasn't been a day that has gone by that I haven't thought of him. True, time heals to some degree, but the longing never goes away, the aching arms, the wishing it were different remains through all of our years on earth. I know it could be so much worse, but it frustrates me when people tell me how "other people's situation is so much worse, aren't you glad you aren't them" type stories. I feel like it discredits the difficulty of what we are going through. Keep chugging along, you are a beautiful person and so strong. Can't wait until May 30th!

I was thinking of you during that talk.

Hope you're enjoying our small bit of Utah sunshine.

And that little outfit is almost as adorable as the little girls wearing it.

I heard that talk too...I cried as they described that woman. It really made an impact on my oldest daughter too.

The story you shared was so touching when I heard it in Conference--along with Elder Scott's talk. I was reminded that there are so many who suffer so much, many in my own circle of friends and family. I hope that the hard days are filled with love and comfort for you, I can't imagine the grief you must feel.